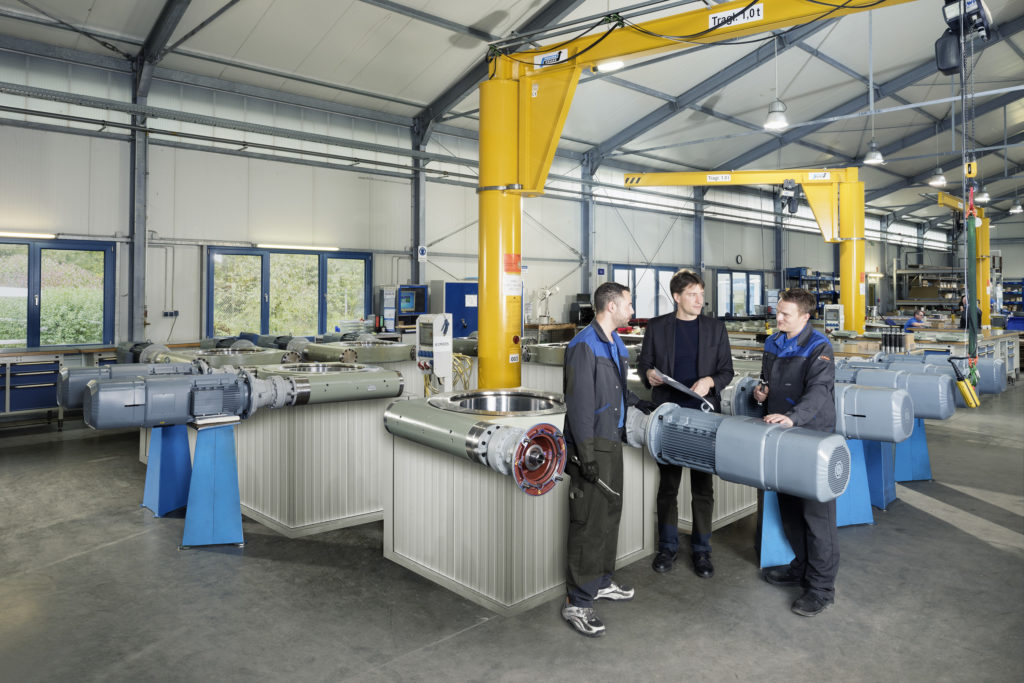 If you’re in the machine manufacturing business or work with excavators, grabs, cranes, rotary forklifts, or man-lift systems, you may have encountered it—a violent screeching sound, followed by a vibration or jerking motion, that slows your system down to a stop and repeats every time you rotate your boom or basket.

If this sounds familiar, then you’ve probably experienced what we call the stick-slip effect.

What causes the stick-slip effect?
The stick-slip effect occurs when there’s rotation along a horizontal axis, something that happens most often with truck-mounted cranes, bucket trucks, and man-lift systems. For example, if the truck carrying the machine is not level—or tilted more than 5 degrees—it is susceptible to stick-slip effect once the boom extends and begins to rotate.

In simple terms, the stick-slip effect is ultimately the result of faulty design and poorly manufactured slew drives.

Let’s get technical. What really causes a stick-slip effect?
The stick-slip effect happens when the efficiency of the slew drive is operating at less than 50 percent. This may be the result of the helix or friction angles, revolution/speed, lubrication, material pairing, or surface condition of the drive.

Let’s break that down a little bit: Stick-slip effect occurs because hydraulic systems are not perfectly rigid. Since the motor and other steel components of the machine have subtle forms of deformation, the system itself has some elasticity to it; so when torque is applied to it, the system becomes spring-loaded. To overcome static friction, the machine increases torque and the worm gear begins to turn. Because the system is elastic—and now spring-loaded—torque drops below what is required to overcome friction. The result: the system whines, screams, slows, stops, and the process repeats. In other words, the stick-slip effect occurs.

The stick-slip effect is not only unpleasant, but it’s also costly. First, there’s the time you’ll spend troubleshooting as you try to figure out why your machine isn’t functioning properly. Then there’s the cost of halting production. Add in labor costs, not to mention the damage done to your reputation because your machine is faulty, and it quickly becomes obvious why stick-slip is such a destructive force.

Our drives are also unique in that they are engineered to be a drop-in replacement for your system. You don’t need to make adjustments for backlash and contact pattern, and you won’t have to make design changes at the snorkel. Simply bolt it in and get to work.

Also worth mentioning is the fact that we offer a wide variety of lubricants to meet the environmental, temperature, torque, and weight demands our customers require.

We work with customers to find the right solution from the start.
Our customers echo similar frustrations about our competitors: Too often they cannot get the customer support they need and when their drive malfunctions—or fails altogether—they are told to simply replace the faulty drive with a new one by the same manufacturer.

Our relationship with customers is continuous. It begins with a consultation and continues through the ordering, installation, and application process. We know that every customer and application is unique. We want to understand the nuances of your project and work together to find a solution that works from the start. That’s why our consultation services are absolutely free. That’s also why we offer in-field troubleshooting support.